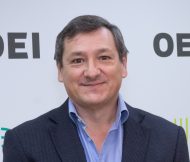 Andrés Guillermo Delich is the Assistant General Secretary of the OEI. He has a B.A. in sociology from the University of San Andrés. He later specialized in Education Management from the University of Buenos Aires. Throughout his career he has distinguished himself in the following areas: Minister of Education of Argentina; Secretary of Basic Education; Member of the Education and Cultural Commission of the Lower House and as a national legislator. He was also National Director of the OEI in Argentina, and has worked as advisor and as an expert in various World Bank and IDB programs. He has published several books and written public opinion articles in Argentinian media outlets on educational issues. At the same time, beginning in 2009, he was named Chair of the Department of Introduction to Sociology – basic cycle – of the University of Buenos Aires.