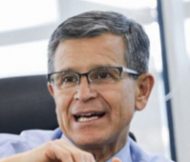 Is a sociologist from the National University of Colombia. He is also an academic from the Universidad de los Andes and Externado de Colombia. Presidential advisor during the various Peace Accords and National Security issues (1993-1995), Under Secretary for Coexistence and Security for the Mayor´s Office of Bogotá (1995-2003).

As an UNDP, IDB, World Bank advisor he has presented projects related to Coexistence and Citizen Security, as well as Master Plans for the set-up of Security and Justice in Colombia, specifically in the cities of Medellín, Pereira, Barranquilla, Cartagena and Manizales. In Ecuador, in Quito and Guayaquil; in Mexico, in Cucautitlán Iscalli. Also in El Salvador, Honduras, Guatemala and Brazil. He worked for the Compañía Colombiana de Petróleos (ECOPETROL) in the design of an institutional system to handle Crisis Management, with the Colombian Institute of Family Well-Being, in the areas of strengthening programs for the attention of children disconnected from the conflict and the System for Penal Responsibility of Adolescents.

In the last five years he worked as a security advisor to the Office of the Mayor in Barranquilla, in the Governor´s Office of El Meta and in the District Monitoring of Bogotá; as advisor of the Inter-American Development Bank (IDB). In El Salvador he evaluated the execution of the Loan for Coexistence and Citizen Security, and as advisor for the Directorate for the Unit for Victims of the Armed Conflict.

Until July 2021, he was Secretary for Security, Coexistence and Justice of Bogotá.