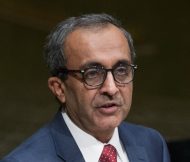 Mr. Jamil Ahmad, Director, UN Environment Programme, New York Office,  leads work on sustainable development and the environment in support of the organization’s policies and programme since 2014. He joined UN Environment in 2008 as the Secretary of the Governing Bodies based in Nairobi, Kenya.

A passionate advocate of sustainability, he regularly engages with governments, academia, industry and speaks to official delegations, students, civil society, and others about environment, climate change and sustainable development. He has been representing the UN Environment Programme in international events.

A senior career diplomat, Mr. Jamil Ahmad entered the Foreign Service of Pakistan in 1986 and has worked in several duty stations across Asia, Europe and Africa with rich experience of multilateral affairs and sustainable development. He was  the lead negotiator on Climate Change for the Group of 77 & China, representing more than 130 member countries in climate change talks in 2007 under  UNFCCC.

His interests include photography, walking in the country side, reading and cooking. He is married and has two sons.