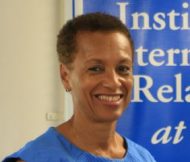 Professor Jessica Byron is Director of the University of the West Indies Institute of International Relations at the UWI St Augustine Campus in Trinidad and Tobago. She is also a member of the Caribbean Policy Consortium, a group of professionals, academics and civil society actors that engages in research and policy advocacy on US/Caribbean relations. Previously she lectured at the Mona Campus of the UWI serving at various times as UWI Coordinator of a B.Sc/MSc. Programme in Politics and International Cooperation that was jointly delivered by the University of Bordeaux Sciences Po, the Universite Antilles, Martinique and the UWI Mona, as Head of the Department of Government at Mona, and as Visiting Professorial Fellow at the Sir Arthur Lewis Institute of Social and Economic Studies, Mona. She also lectured for some years at the International Institute of Social Studies, Erasmus University, The Netherlands and served as a Foreign Service Officer with the Government of St. Kitts and Nevis and with the Organization of Eastern Caribbean States, based at the East Caribbean High Commission in London.

Professor Byron has published extensively on Caribbean-Latin American international relations and on small states and territories in the global political economy.