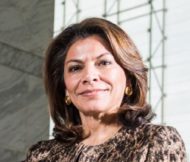 Former President of Costa Rica (2010-2014); former Vice-President of Costa Rica (2006-2010); and current Vice-President of the World Leadership Alliance - Club de Madrid (since March 2018). Laura Chinchilla Miranda studied political science at the Universidad de Costa Rica. She also holds a Master in Public Policy from Georgetown University. She is married to Mr. Jose Maria Rico and is the mother of a son. Ms. Chinchilla has dedicated her career to public service and to consulting for international organizations. At fifty years old she was elected President of the Republic of Costa Rica on February 7th, 2010, for a constitutional term of four years. She was the first female head of state in her country. Her election as President of the Republic of Costa Rica was preceded by a successful political career, which began with her appointment as Minister of Public Security-¬‐the first woman to hold that position-¬‐between 1996 and 1998. While in that role, she also served as President of the National Immigration Board and the National Drug Council. Between 2002 and 2006 she was elected member of the National Congress where she chaired the Committee on Legal Affairs and the Committee on Narcotics. In 2006 she was elected Vice President of Costa Rica, while assuming office at the Ministry of Justice at the same time. Finally, in 2010 she became president of the country. During her years of public service she highlighted the promotion of various policies regarding citizen security, including the professionalization and modernization of the police, the reform of the criminal and criminal procedure codes, the adoption of laws against drug trafficking and organized crime, and diverse pathways for citizen participation in preventing violence. One of her most outstanding achievements during her time as President of the Republic was the steady decline of major crime rates in Costa Rica, including homicide and femicide rates. Mrs. Chinchilla also put forth measures on institutional reform for the Costa Rican government, on digital governance, on the promotion of women’s rights, on the protection of children and on environmental sustainability. Her efforts in the latter area, especially in the protection of the seas, earned her two important international awards: the 2011 Peter Benchley "Excellence in National Management of the Ocean" and the "Award of the Shark Guardian of the year" in 2013. Along with her public career, Mrs. Chinchilla Miranda dedicated part of her professional career to the international sector. She has worked as a consultant in Latin America and Africa with various international organizations in the area of institutional reform, with particular emphasis on judicial and public security reform. Her past work includes diagnostics on the justice sector for the Agency for International Development (USAID); coordination of studies and projects on judicial reform for the United Nations Development Programme (UNDP) and assessments and council on police reform for the Inter-American Development Bank (IDB). She has been part of a number of initiatives to promote reforms on citizen security and human rights throughout Latin America. She has lectured at various forums and has several publications in both Spanish and English on topics related to the administration of justice, public security and police reform. She holds Honorary Doctorates from the United Nations University for Peace, Georgetown University, and Kyoto University of Foreign Studies. As a former President, she is a member of prestigious initiatives that promote international dialogue and cooperation, such as the Club de Madrid, the Inter-American Dialogue, and the Latin America Presidential Commission. She headed the Organization of American State´s Observation Electoral Mission during the 2015 electoral process in Mexico, as well as the Observation Electoral Mission during the 2016 elections in the United States. She is a visiting professor at the Government School at the Instituto Tecnológico de Monterrey, where she leads a course on Democracy and Citizenship in Latin America, and at the McCourt School of Public Policy in Georgetown University.