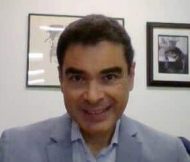 Senior Fellow and Director of the Migration, Remittances, and Development Program for Latin America, Inter-American Dialogue

Manuel Orozco is senior fellow at the Inter-American Dialogue, and currently director of the Migration, Remittances, and Development program. He founded the Center for Migration and Economic Stabilization at Creative Associates International. He is a  Fellow for the Institute for the Study of International Migration at Georgetown University, Senior Migration; Remittances Advisor for the International Fund for Agricultural Development. Dr. Orozco is also chair of Central America at the U.S. Foreign Service Institute at the U.S. Department of State. He also taught at American University, and George Washington University.

He has theorized, conducted extensive research, policy analysis and advocacy on issues relating to economic development, global flows of remittances, and migration and development worldwide, and regional trends in Central America. His work has led to international policy and business initiatives leveraging these flows to build assets among families and migrants, strengthen market competition, and promoting innovative development policies. He works directly with migrant organizations and nationalities in several countries and provides advice on diaspora engagement and financial independence.

Some of his achievements include the design and implementation of a financial advising strategy that successfully motivates people to formalize their savings at financial institutions. The strategy has reached over half a million people in more than 15 countries. He has also introduced strategies on microfinance, and methods that link diaspora investments in their homelands.

In 1999 he introduced a pricing methodology on remitting transaction costs (now adopted by the World Bank) and produces a scorecard on industry competitiveness in money transfers. His work has included the design of evaluation tools to determine a project’s development impact. He works and monitors financial sectors in more than 50 countries. He has worked extensively in Africa, Asia, Europe and Latin America and the Caribbean.

He has testified every year before Congress and has spoken before the United Nations General Assembly.

Orozco holds a Ph.D. in political science from the University of Texas at Austin, masters in public administration and Latin American studies, and a BA in international relations from the National University of Costa Rica.

Manuel Orozco has published widely on migration, remittances, Latin America, globalization, democracy, conflict in war torn societies, and minority politics. His publications include studies about the intersection between remittances and finances, financial literacy and development.  He has analyzed and designed development strategies in more than 100 countries globally.

Journal and report publications include the following, “Remittances to Latin America and the Caribbean in 2014,” Orozco, Manuel, Laura Porras, and Julia Yansura, February 2015. “Understanding Central American Migration: The Crisis of Central American Child Migrants in