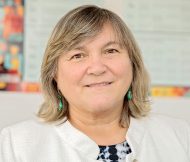 With doctorates in Law and Social Sciences from the University of the Republic of Uruguay, she also holds a Masters in Public Policy from Johns Hopkins University in Washington, DC. She joined UN Women as Regional Directional for the Americas and the Caribbean in July 2019. She also worked as Director of the Program Division in UN Women headquarters in New York. She joined UN Women after completing her tour at the United Nations Office for Project Services (UNOPS) headquarters, in Copenhagen, where she was the Director of the Office of Global Services Portfolio, in charge of the operational results of the global portfolios operated by UNOPS, as well as the establishment of strategic alliances. Previously, she was the Regional Director of UNOPS for Latin America and the Caribbean.

Before joining the United Nations, she held various positions at the Ministry of Foreign Relations of Uruguay, including Political Counselor at the Uruguay Embassy in Washington, DC, and as delegate to the U.N. General Assembly. She also held the position of Alternate Representative before the Board of Governors of the World Bank.