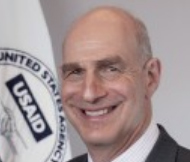 Mark Feierstein serves as Principal Advisor to the Administrator, managing a range of USAID’s policy priorities and leading the agency’s coordination with the other foreign policy agencies in the U.S. government.

Feierstein previously served at USAID as Associate Administrator and Assistant Administrator for Latin America and the Caribbean. He was also Special Assistant to President Obama and Senior Director for Western Hemisphere Affairs at the National Security Council.

Most recently, Feierstein served as Senior Advisor at the commercial diplomacy firm Albright Stonebridge Group and as a consultant with Major League Baseball. He has also overseen public opinion research in more than 30 countries, most recently as a senior advisor at the polling firm GBAO.

During the Clinton Administration, Feierstein served as director of USAID’s global elections office. He also worked in the State Department as Special Assistant to the U.S. Ambassador to the Organization of American States. Before that, he was director for Latin America and the Caribbean at the National Democratic Institute, overseeing programs to strengthen democratic institutions in developing countries.