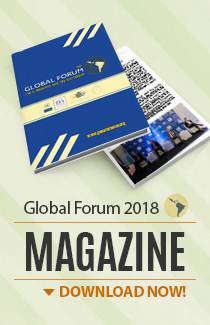 NEW YORK – The  Latin American and Caribbean regions are currently experiencing a notorious drop in the quality of its democracy. Expert Daniel Zovatto, Regional Director for Latin America and the Caribbean for the IDEA Internacional organization, revealed during a keynote speech statements delivered during the Global Forum for Latin America and the Caribbean being held in New York City with the support of the Global Foundation for Democracy and Development (GFDD) and its sister organization in the Dominican Republic, the Fundación Global Democracia y Desarrollo(Funglode). The event is headed by Dr. Leonel Fernández, the former President of the Dominican Republic.

In his keynote presentation, titled “Electoral Super Cycle 2018,” Zovatto highlighted that the apparent drop in the quality of democracy in the region is marked by the impact of high-profile corruption scandals, and the issue of insecurity.  These issues – said Zovatto – negatively impact the region’s political, social and economic sectors.

Zovatto also explained that recent professional surveys carried out have determined an important drop in the credibility of the institutions that are the mainstay of democracy, a situation that he considers worrisome.

He also reiterated that in the last few years there have been changes in Administrations in Colombia and Mexico, and possibly in Brazil, marking a clear tendency in the region. At the same time, he indicated that in 2019 there will be elections in six countries in the hemisphere,  including Argentina, Bolivia and Uruguay, where concerns have been expressed regarding the outcome of these electoral processes.

Zovatto also discussed the situations currently faced by the Bolivarian Alternative for the Americas (ALBA), the Community of Latin American and Caribbean States (CELA) and the Union of South American Nations (UNASUR). According to the expert, all these institutions are losing their impact in the region.

In order to put a stop to the weakening of the quality of democracy in the region, Zovatto recommended the need for the region’s leaders to place greater emphasis in the execution of policies that will create more quality jobs, combat inequality and put an end to corruption and impunity.

The international expert explained that the loss of faith in democracy has also been encouraged by the slowdown of the economy, which makes the overall  situation even more disconcerting. “[The region] is going backwards when it comes to inequality and poverty,” said Zovatto.

Zovatto highlighted that the Dominican Republic is an exceptional case in the region because the country has a political party that has won various consecutive electoral processes, and currently has a majority in Congress.

The panel of experts was moderated by José C. Moya, Director of the Institute of Latin American Studies/Columbia University.

In her intervention, panelist María Victoria Murillo stated that the situation presented by Zovatto has been provoked by the weaknesses of the regional electoral systems, the ineffectiveness of State policies and social inequality throughout the region, which continues to be the most unequal in the world.

At the same time, Mónica Pachón suggested that in order to reverse this trend it is imperative to introduce policies that will guarantee that the democratic processes be more inclusive and effective in all aspects of society.

Panelist Gerardo de Icaza suggested that the weakness exhibited in the democratic structures in the region is due to the crisis present in key elements of the system, including in the areas of freedom of expression, transparency and respect for human rights.

Finally, Marcela Berland highlighted the impact social media is having on the current electoral processes, an element that must be taken seriously both by governments and political parties.  She explained that in light of this reality the governments and the parties must work harder to improve their relationship with society.