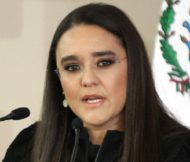 Alejandra Sota has a bachelor’s degree in Political Science from Instituto Tecnológico Autónomo de México (ITAM) and a master’s in Public Administration from the John F. Kennedy School of Government at Harvard University. She is a specialist in communication, public management, political campaigns and public opinion, with almost 20 years of experience. She has worked on two presidential campaigns (2000 and 2006) and in various local elections. She was the Director for Research and Analysis in the Chamber of Deputies for the PAN during the LVIII legislature. Sota held several positions in the Federal Government including Director of Social Communication for the National Energy Bank (Sener) and Coordinator of Advisors for the National Institute of Women (Inmujeres). During the Calderón Administration (2006-2012) she was Public Opinion, Government Messaging and Strategy Coordinator, as well as Social Communication Coordinator and Spokeswoman. Currently she heads Integra, a consultancy firm specialized in public opinion and communication strategy.