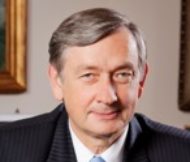 Danilo Türk (1952) has a BA in Law from the University of Ljubljana in 1975, an MA from the University of Belgrade (1978), and a PhD from the University of Ljubljana. In 1983 he became Director of the Institute on International Law at the University of Ljubljana. He was member of the Sub-Commission on Prevention of Discrimination and Protection of Minorities, a UN body of independent experts. In that capacity he served, in 1986-1992, as the UN Special Rapporteur on the realisation of Economic, Social and Cultural Rights. In 996-1997 he also served as member of the Human Rights Committee. In 1990-1991 he took part in the drafting of the Constitution of the Republic of Slovenia by preparing the draft chapter of the Constitution related to human rights and fundamental freedoms. From 1992 to 2000, Mr. Türk was the first Slovene Permanent Representative to the UN in New York and represented Slovenia on the UN Security Council in 1998 -1999. In 2000 he was invited by Mr. Kofi Annan, the then Secretary –General of the UN, to serve as UN Assistant Secretary-General for Political Affairs (2000 – 2005). In 2005 he returned to Slovenia as Vice-Dean of the Faculty of Law, University of Ljubljana. In 2007 he was elected President of the Republic of Slovenia from 2007 to 2012. He became member of the Club de Madrid in 2013. In 2016 he was one of the candidates for the post of the Secretary-General of the UN. In 2015-2017 he chaired the Global High Level Panel on Water and Peace which published its report "A Matter of Survival" at the end of 2017.