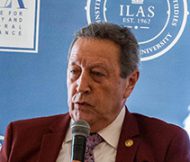 Mr. Cerezo is a Lawyer and has a Master's Degree in Public Administration. His service and commitment, for over 50 years, to peace, democracy, development and the integration of the region, earned him being called by many -Ambassador of Central America. He began his political career at the University and from there, as President of the Law Students, he promoted the prolonged resistance for democracy. On his journey he saw his friends and leaders die, murdered by the repressive governments of the time. He himself survived four assassination attempts. In 1986 he became the first democratically elected civilian in the modern stage of democracy in Guatemala. His administration managed to establish democracy and the institutionality still in force in the country, thus contributing to the modernization of the State. He revived the economy and diversified the exports; with a futuristic vision he established the system of protected areas, within a sustainable development scheme, he is the creator of the Maya Biosphere Reserve. He led the recognition and inclusion of the indigenous population in Guatemala. He established the Ministry of Culture and proposed the first education reform. The changes and transformation, in favor of the common good, which his government promoted provoked the opposition of various business and military groups that were involved in several coups attempts which the government resisted. In his inauguration speech, in the context of the Cold War, inspired by the Contadora Group, he called on his counterparts to seek Central American paths for peace, what would later become the Peace Agreements of Central America, Esquipulas I and II that contributed decisively to peace within the region, the institutionalization of democracy and the recent political promotion for regional integration.