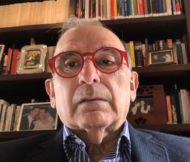 Former Vice-president of Colombia; Former Lead Negotiator for the Colombian government in the peace talks with FARC guerrillas

Humberto De la Calle has a PhD in Law and vast experience in politics and government and constitution and administrative law. During his time as Government Minister he acted on behalf of the Colombian Government with the Congress that put forth the 1991 Constitution. He served as Director of the Electoral Body where he drafted the current Electoral Code and oversaw various elections. He is an international consultant on electoral issues. Dr. De la Calle presided over deliberations which led to the approval of the Inter-American Democratic Charter at the OAS. He served as Magistrate on the Supreme Court of Justice. De la Calle was elected Vice-president of Colombia and has been an Ambassador, university professor and is the author of various books and essays.