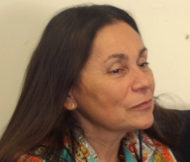 Maria (Maki) Haberfeld is a Professor of Police Science, in the Department of Law, Police Science and Criminal Justice Administration at John Jay College of Criminal Justice in New York City. She was born in Poland and immigrated to Israel as a teenager. She served in the Israel Defense Forces in a counter-terrorist unit and left the army at the rank of a sergeant. Prior to coming to John Jay she served in the Israel National Police and left the force at the rank of lieutenant. She also worked as a special consultant for the U.S. Drug Enforcement Administration in the New York Field Office. She has conducted research in the areas of public and private law enforcement, integrity, and white-collar crime in the United States, Eastern and Western Europe and Israel. In addition to her research, she has also provided leadership and ethics training to a number of police agencies, in the United States and around the world, some of these countries include, India, China, Mongolia, Taiwan, the Dominican Republic, the Czech Republic, Poland, Norway and others . Since 2001, as a Founding Academic Director, she has been involved in developing, coordinating and teaching in a special educational program at John Jay for the New York City Police Department and its sworn officers. Her publications include: Critical Issues in Police Training (2002, 2013, 2018), Contours of Police Integrity (co-editor, 2003), the International Volume of Sage’s Encyclopedia of Law Enforcement (volume editor, 2004), Police Leadership (2005), Enhancing Police Integrity (co-author, 2006), and Comparative Policing: The Struggle for Democratization (co-editor, 2007). Her work includes three books on terrorism related issues: A New Understanding of Terrorism (co-editor, 2009), Modern Piracy and Maritime Terrorism (co-editor, 2009), Terrorism Within Comparative International Context (co-author, 2009), Russian Organized Corruption Networks and their International Trajectories (co-authored, 2011), Critical Issues in Police Training (2011), Police Organization and Training: Innovations in Research and Practice (co-edited, 2011) and Police Leadership: Organizational and Managerial Decision Making Process (2012), Policing Muslim Communities (co-authored, 2012), Match-Fixing in International Sports (co-edited, 2013), Introduction to Policing: the Pillar of Democracy (co-authored, 2014, 2018) Measuring Police Integrity across the World (co-edited, 2015), and a 3 volumes co-edited monographs on Community Policing and Technology (2018, 2019). Her most recent co-edited book, Exploring Police Integrity around the World, will be published in the fall of 2019.