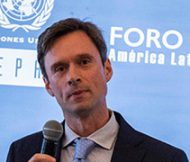 As a senior member of the Latin America Country Analysis team, Robert contributes to The Economist Intelligence Unit's extensive product portfolio, advises private-sector clients and government officials, participates in conferences and is frequently quoted in the specialist media. He has been responsible for covering most of the key economies in the region, and currently specialises in Brazil. In his role as Manager for Latin America, Robert is responsible for providing technical and analytical support to the EIU's Latin America specialists on sovereign credit, currency and banking sector risk issues. Before joining the EIU in 1997, Robert conducted consultancy work for the European Commission, and previously worked for a development-oriented non-governmental organisation in Mexico. Robert has an academic background in the politics and economic development of Latin America, and holds a Bachelor's degree from the University of Bristol and a Master's degree in development studies from the University of Sussex.