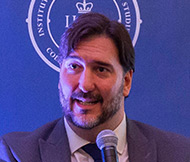 Gerardo de Icaza has been Director of the Department of Electoral Cooperation and Observation since March 1, 2014. In his years as Director, he has led more than 50 Electoral Observation Missions in more than 20 countries. In 2018, he served as Acting Secretary for Strengthening of Democracy from February to July. Previously, at the National Electoral Institute of Mexico (INE) he served as Deputy Legal Director for Overseas Voting and as Coordinator of the Technical Committee of Specialists on Overseas Voting. He was a law clerk, and then Head of the International Affairs Unit in the Electoral Tribunal of Mexico. He studied Law and has a Master's Degree in International Relations and Communication. He has given conferences at Princeton, Georgetown and Science Po Universities, and has published numerous academic articles on democracy and electoral systems in various languages.